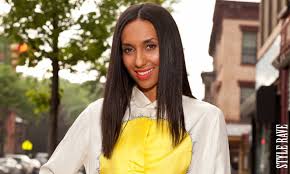 Vogue.com has named a new editor to oversee its website: Chioma Nnadi, who will take over the job effective immediately. Chioma, who most recently was fashion news director of Vogue.com, replaces Stuart Emmrich, who resigned in June after less than a year in the job to focus on book writing.

Chioma started her career at Condé Nast-owned Vogue since 2010 — first, as a fashion writer for the magazine, before she eventually became the fashion news director of Vogue.com in 2014 where she worked closely with creative digital director Sally Singer until the latter’s departure late last year.

“Above all, we know her as someone who intuitively understands fashion and brings to it a genuine love of discovery,” Wintour said of Nnadi in an e-mail Monday morning seen by WWD. “She looks in unexpected places and all over the world to find out who is doing the best work and who we should be celebrating now. I absolutely rely on her eye and her cosmopolitanism and her taste. Even better, she is forward-looking and understands that Vogue needs to reach new audiences and do so in new ways. She respects our iconic past but is not tied to old traditions.”

In addition to overseeing editorial, Chioma will be charged with continuing to grow traffic to Vogue.com, which has on average 13 million monthly visitors, lower than Elle.com and Bazaar.com. Her experience while working with “The Evening Standard Magazine,” “Fader” and “TRACE,” is expected to complement what was lacking for Stuart Emmrich, whose experience in digital media was almost nonexistent.

“In these unprecedented times, it feels especially urgent and exciting to be telling stories,” Chioma said in a statement. “And now the touchpoints through which we communicate are more expansive than ever. Vogue has first and foremost been a place of discovery and I think at this moment it feels especially important to amplify the new voices in fashion and culture who are changing the zeitgeist.”

Many Nigerians took to social media to celebrate her appointment.

WHY YOU NEED A BUDGET

5 wardrobe essentials you should know