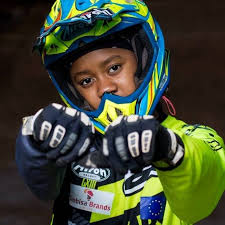 The award recognizes young people (aged 8-16) who are making a positive impact in their schools, communities as well as doing extraordinary things that are influencing a positive change in their environment.

Munda, 16, after receiving the news that she has been shortlisted for the Nickelodeon Kid of the Year award took to Twitter to express her excitement.

“I am honored to have made shortlist for the Nickelodeon Kid of the year 2020 with Time Magazine, even if I don’t win this award, being alongside the incredible kids gives me hope for a better future celebrating kids around the world who are inspiring in their communities,” she tweeted.

The Zimbabwean female motocross rider who relocated to the United States last year in pursuit of her dream to become a professional motocross racer will now compete with 49 inspiring kids across the globe for a slot in the quarter-final semi-final lists.

Each semi-finalist will receive funds to further their respective causes and Five finalists will then be selected to feature in a TV special—hosted by Trevor Noah (The Daily Show with Trevor Noah) and simulcast on Nick and the CBS Television Network in December–with one kid ultimately being recognized as TIME Kid of the Year and featured on a cover of TIME with a companion story in TIME For Kids.

Born in Harare, Zimbabwe, Tanyaradzwa Adel Muzinda began racing at the young age of 5 and later became famous for being the first female to win a motocross championship in Zimbabwe since it was started in 1957. Following her record-breaking achievement, Muzinda continued to dominate local competitions but often missed her chance to compete at the international level due to a lack of funds to travel outside the country.

Asides her financial challenges, the young champ has also had her fair share of pain that often comes with being a motocross rider. In 2017, she fell off a 100 feet long jump, hurting her hip, while practicing for a race and was unable to walk properly for a few months.

“I was not able to walk properly for a few months. It also affected my back, so I have back problems that I have to work on,” she told CNN last year.

Despite the recurring back pain, Muzinda continues to compete at the professional level, breaking records and bagging awards including:

How to improve your online presence in 2020

There’s A New Board Chair In Town