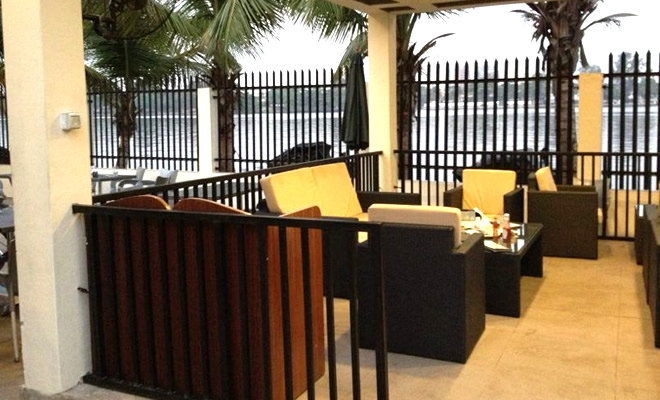 The lagos state government recently eased the Lockdown even more, restaurants are now open and we cant wait to explore our taste bud just the way we like it. we have you in mind and have come up with restaurants you can chill and have so much fun we know you missed.

Ocean Basket might be one of the pricier places to eat on the Lagos mainland, but it’s also home to the best seafood platter in Lagos. Add to that the aesthetically pleasing space — think handwritten food notes on a white-chalk wall, pastel furniture, and chandeliers hanging from a ceiling that mirrors a sea wave — and the rooftop dining-area restaurant, and suddenly the bill doesn’t seem so bad. The full-deck platter with prince prawns, mussels, calamari, calamari steak strips, and fish is ideal for a party of five or more, but there are smaller versions too, if you’re splurging solo.

Street-food vendors in Lagos, with their makeshift kitchenettes under large umbrellas, are referred to as bukas. Bukka Hut, although not a street-food vendor, serves Nigerian meals that its proprietors swear are prepared the same as street-food bukas, and so have the signature flavors that make them so irresistible. Try the ofada rice at Bukka Hut, a locally grown rice which, because it is not overly processed, is slightly brown when cooked. The rice is served with an accompanying sauce called ofada sauce, which is prepared using fermented locust beans, assorted meat, smoked fish, palm oil, bell peppers, and Scotch bonnet peppers.

Marco Polo is one of a number of restaurants in Lagos that specialize in regional Chinese specialties. As Sino-African relations continue to blossom, the city, as an important economic hub in western Africa, is receiving an ample share of Chinese nationals, mostly concentrated at Ilupeju, an industrial area on the Lagos mainland. The wonton soup is flush with plump shrimp dumplings in a rich vegetable and chicken broth, and the vegetable fried rice is beautifully prepared, with perfectly formed egg clumps and colorful veggies.

Imported by the Lebanese, Nigerian shawarma has quickly become the most popular street food in Lagos. Nigerian shawarma doesn’t differ much from the original: It comprises vegetables, sausages, and marinated chicken grilled on a vertical spit, along with some sour cream, all wrapped in flatbread. At Best Shawarma, you can choose between a chicken or beef shawarma and have the option of adding thin sausages to the roll

At Danfo Bistro, one of the city’s popular street foods — ewa agoyin— has been repackaged and is served in a space that’s pure Lagos. Ewa agoyin is made of beans cooked to mush and served with freshly baked bread. At Danfo Bistro, fried plantain cubes top the classic street-food combo. Finger foods like chicken wings are served in strips of newspaper-like packing material, mirroring how street-food vendors pack them. The space is also worthy of note: The decor reimagines Lagos’s popular yellow buses as eating booths, showcasing the signature black-and-yellow stamp of these buses as well as other iconic motifs of Lagos

Circa is the place to go on a date if you want them to swoon over your incredible taste. Here, the restaurant offers a local and Continental menu, including fresh Greek vegetable salads prepared using vegetables grown in the restaurant’s hydroponics farm. At the bar overlooking the lagoon, however, be sure to ask for the signature cocktail, a sweet, peach concoction served with a wedge of lemon called Okoloko. The recipe is a secret, but the potent wallop of the rum is hard to miss.

Sure, you can come for the wide-ranging menu of burgers, pasta, salads, and seafood, and stay for the views of the Lagos Lagoon and kid-friendly collapsible play houses. But you’re really here for the doughnuts: large, golden-brown, filled with sweet custard, and topped with a sprinkling of sugar. You would do well to consider the red velvet cake and hummus plate, too, but really it’s all about the donuts.

Habits of entrepreneurs that can improve your business

There’s A New Board Chair In Town