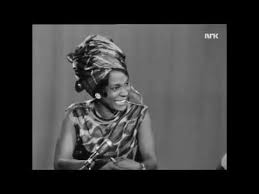 Elsie Olusola was a TV presenter and actress rose to national prominence through the epic television programme Village headmaster which was created and directed by her husband ambassador Segun Olusola. It was one of the most popular television sitcoms in the 70s and early 80s and it ran for over a decade.

Elsie endeared herself to the nation as the character Sisi Clara in the Village headmaster series. In real life, she was just as fascinating as the elegant character she played whose glamour and personality made her the trendsetter of Oja Village.

Born to an Efik father and Itsekiri mother. Olusola studied in the UK from an early age and was a diligent student of Drama and Communication Arts at the renowned Rose Bruford Academy of Speech and Drama. She also worked with the Voice of America as an African correspondent for several years before she retired to found Talent Associates, a communications consulting firm.

She was a women’s advocate, and belonged to several women organizations including the National Council for Women’s Society, Business and Professional Women’s Club and Zonta International among others. Elsie is fondly remembered for her creative and critical thinking in acting, communications and the promotions of Women’s Rights.

FULL WINNERS’ LIST OF THE 5TH EDITION OF NIGERIA 25UNDER25 AWARDS