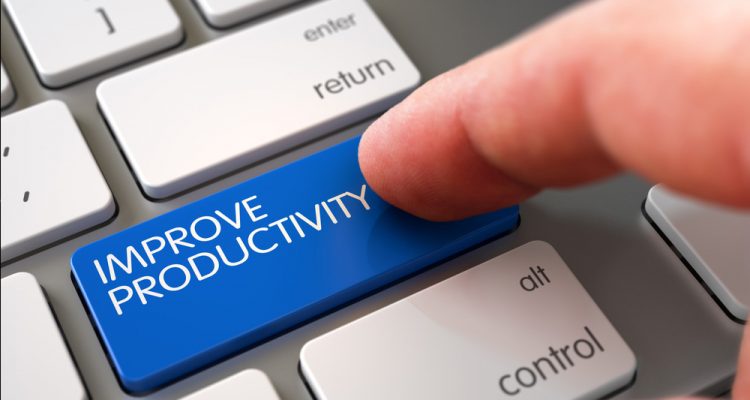 There are only so many hours in the day, so making the most of your time is critical. There are two ways increase your output–either put in more hours or work smarter. I don’t know about you, but I prefer the latter.

Being more productive at work isn’t rocket science, but it does require being more deliberate about how you manage your time. This post will walk you through 6 simple but effective strategies for increasing your productivity at work.

1. Track and limit how much time you’re spending on tasks.

You may think you’re pretty good at gauging how much time you’re spending on various tasks. However, some research suggests only around 17 percent of people are able to accurately estimate the passage of time. A tool like Rescue Time can help by letting you know exactly how much time you spend on daily tasks, including social media, email, word processing, and apps.

It sounds counterintuitive, but taking scheduled breaks can actually help improve concentration. Some research has shown that taking short breaks during long tasks helps you to maintain a constant level of performance; while working at a task without breaks leads to a steady decline in performance.

While we usually think of a stress as a bad thing, a manageable level of self-imposed stress can actually be helpful in terms of giving us focus and helping us meet our goals. For open-ended tasks or projects, try giving yourself a deadline, and then stick to it. You may be surprised to discover just how focused and productive you can be when you’re watching the clock.

While we tend to think of the ability to multitask as an important skill for increasing efficiency, the opposite may in fact be true. Psychologists have found attempting to do several tasks at once can result in lost time and productivity. Instead, make a habit of committing to a single task before moving on to your next project.

5. Give up on the illusion of perfection.

It’s common for entrepreneurs to get hung up on attempting to perfect a task–the reality is nothing is ever perfect. Rather than wasting time chasing after this illusion, bang out your task to the best of your ability and move on. It’s better to complete the task and move it off your plate; if need be, you can always come back and adjust or improve it later.

No one can be expected to resist the allure of an email, voicemail, or text notification. During work hours, turn off your notifications, and instead build in time to check email and messages. This is all part of being proactive rather than reactive .

EASY WAYS TO BARGAIN AND SAVE MONEY